If only there were ten minutes of peace, undistracted!

For most of us, urban reality consists of the tailgating barrage of the freeway wars. The only thing resembling a birdsong we experience is being ‘flipped by the bird’ as we choose, even in the slow lane, to leave a car length or two between us the next driver. The entire globe is on a twenty-four hour cycle of constant pandemonium...or...hmmm, maybe it’s just my age! 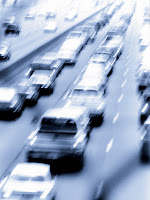 Some of my adult life and career has been taken up in the madness of the advertising and promotion business. For years I was involved in working with national advertising organizations as an account executive, art director and designer, preparing creative conceptual ideas that would impact sales initiatives or improve brand recognition.

Even before wireless technology, bringing humankind the apparent need to be linked with an all consuming transparent umbilical connection cord, I felt the constant barrage of the ‘tyranny of the urgent,’ with unrealistic, incessant deadlines. Monday mornings were spent in boardrooms laced with curtains, smoke dense blue and constant salvos of X-rated profanity! Bosses pushed incessant...‘What have you done for me lately?’ The television show ‘Mad Men’ set in the sixties, brings me a stark reminder of that reality. At cocktail receptions I was scrutinized and confronted by my superiors as to exactly what I was drinking and or not, as the codependency of what the client interpreted was always seen as preeminent. The insipid, shallow waters of that country club atmosphere and old boys network reigned supreme!

Sunday afternoons were often spent fielding calls around the country from Oakland to Orlando. Seven days were never enough! Tsunami’s constant roar of the urgent, left a trail of flotsam’s barrage as I was beached, twisted and empty! How does one escape the constance of this tyranny? Obligation to keep house and home together seemed of ultimate import, but at what cost to soul and sanity?

Today the era has changed and so also, the devices linking us to personal enslavement. My tendency to interminable device checking, thumb tapping, tunnel vision aloneness, has led to feelings of even greater urgency and anxiety. I can quickly become enslaved to the unseen, 365 chained days a year!  ‘Vacation’ without connectivity may be grounds for dismissal. 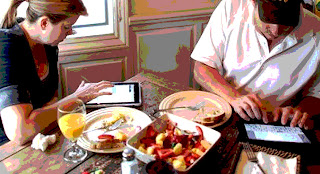 Inter ‘personal’ social interaction is negated, as we sit texting into the cyber night avoiding the audible at all cost. Eye contact is given wide berth. Our breath may brush the other opposite but our thoughts drift as far as ships in the night.


There are always two sides to any coin. The wonders of new technology bring us digital pairing and the potential for ‘a level’ of more constant relationship. It also brings the possibility of invisible leg irons of never ending slavery to unseen masters or our natural proclivity of hiding while in plain view.

Now please...don’t ‘delete me’ as someone who isn’t ‘today’ in his thinking. Not only do I understand that new technology and its digital connectedness has brought wonderful new access to community and information, I too have come to embrace it wholeheartedly. So bear with me a minute!

I’m merely suggesting there should be much more to our life experience than digitized images, hugs, kisses and key stroke smiles!

We should also reengage life with skin on!

One way I found a little respite during those crazy days and nights in the advertising game was invoking the habit of creating ten-minute vacations.

Regular vacations in and of themselves were made up of having to let my boss know exactly the phone number where I could be reached at any given moment, resulting in constant interruption. I felt something like my attempted right brain train of thought was constantly invaded and assaulted by the sledgehammer of my left brained bosses demanding agenda. The consequent chaos worked itself out into a tightly coiled stomach, panic attacks in the ER and ill tempered reactions toward or distraction from my family and friends and our much needed rest and reconnection.

Rather than the rest potentially derived from getting ‘unplugged,’ enslavement encircled and wrapped it’s cord of urgency around my throat of peace and potential tranquility. The world of bash, dash, swallow and gulp engulfed my life rather than a slow rumination on God and the exquisite gifts of the senses He had endowed life with!

Do I really taste this food called life, or just swallow madly in cold numbness?

To alleviate some of this mad cacophony, I came to create a little habit of ‘dropping out’ and finding places of secluded peace, quiet and meditation for a few brief moments throughout my day. Not in the sense of the drug crazed sixties either! Over years of rushing about the city, I searched for and discovered several ‘oasis’ that could be accessed quickly from several freeways, taking me instantly out of the demanding clamor to the sweet sight of a cardinals winter red flash or the thrush singing spring!

Sound is not the equivalent of noise.

A small pebble breaking the glasslike threshold of a serene pond or northern lake at dawn is a sound that brings a smile to my face and peace to my soul. The haunting call of the wild loon brings invitation to wonder! The first spring sighting of a robin or the raucous call of the red winged blackbird returning to the north bring with them a sense of hope and confidence that warmth is near at hand.

A quiet spring rain playing taps on the stretched blanket of last years autumn maple leaves is an entrance to rejuvenation. The deluge of a downpour and crack of thunder reverberating across the tin roof of a cottage brings a sense of security and deep well being. The thunderclap itself reminds me of my relative size to the grandeur and power of the natural world just beyond.

On and on I could rehearse with myriad examples of how God has given a complete battery of senses to point out my need for stillness and quiet contemplation. Too often I neglect so great a gift by ignoring the depth of my senses and emotional responses.

Without coming aside and momentarily still, I never hear the myriad sounds found in a local marsh at spring or the roar of a torrent cascading over the rock foundation of a mountain stream.

Privileged in growing up on Canada’s west coast and the great rolling plains just east of the mighty Canadian Rockies, it is of benefit for me to cast my mind back and reflect on the sounds and sights of wild experiences I had wandering this untamed country as a boy.

Faced now with living in a giant megalopolis, I’m challenged with the tendency ‘to fall apart’ through a life of imbalance rather than making the choice toward reflection, stillness and places of peace and refreshment. It has been well said that, ‘if you don’t come apart, you will literally come apart.’

Complete absorption in the act of pushing paint around a canvas in artistic endeavor or being lost in richly layered classical, jazz, rock or blues performances brings delight and delivers me to another zone, until...that shrill interruption of an unwanted ringtone tempts me to start throwing things.

The position of being tied to the attempt of constantly trying to please others and finding personal peace of mind and soul belie my constant struggle.

Scripture and personal relationship with life’s author should be the basis for a life of balance. Clearly my Father wants me to choose to be stock-still some of my allotted twenty-four. He has shown in the metaphor of nature’s call, that it is in coming aside that I can be guided toward Him. In stillness I can hear the quiet nonintrusive voice of His Spirit lead me to consider finding intimacy with Him. Once he has me in the place of stillness, I have a chance of pondering what he is saying to me.

David suggests...
‘Show me, O Lord, my life’s end and the number of my days;
let me know how fleeting is my life.
You have made my days a mere handbreadth;
the span of my years is as nothing before you. Each man’s life is but a breath.
Man is a mere phantom as he goes to and fro:
He bustles about, but only in vain; he heaps up wealth, not knowing who will get it.
But now, Lord, what do I look for? My hope is in you.”
Psalm 39:4-7 NIV

The Jesus later on...
And He said to them, "Come away by yourselves to a secluded place and rest a while." For there were many people coming and going, and they did not even have time to eat.
Mark 6:31

The challenge that has overwhelmed me often throughout my life is my tendency to ignore my own advice. Too often I forget the wonder of balance offered as I grab the bit between my teeth and try to run life myself. The results are often disastrous and debilitating.

Balance of course can be misconstrued too!

The idea that it is an act of keeping exactly on the trail sounds a lot like legalistic mumbo jumbo, keeping us in a life of complete constriction. Balance, at least in this context is coming apart from the daily grind to seek a little rest for one’s soul by choosing a moments quietude or exploration with expectation...outside the box of others constriction!

Watching television, texting friends, listening to your favorite MP3 file or a myriad of other valuable activities have there place. I enjoy these diversions as much as the next person.

The issue becomes a problem for me, when any of these ‘good activities’ becomes an excuse for complete disconnect with my Father who wants to bring me to the place of quiet listening and quick obedience to the soft strains of His voice and have me look deep into the eternity of his eyes as he attempts to let me know he is waiting and wanting some personal connection with me! 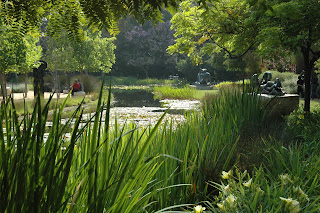 Posted by J. Douglas Thompson at Monday, November 19, 2012 No comments: